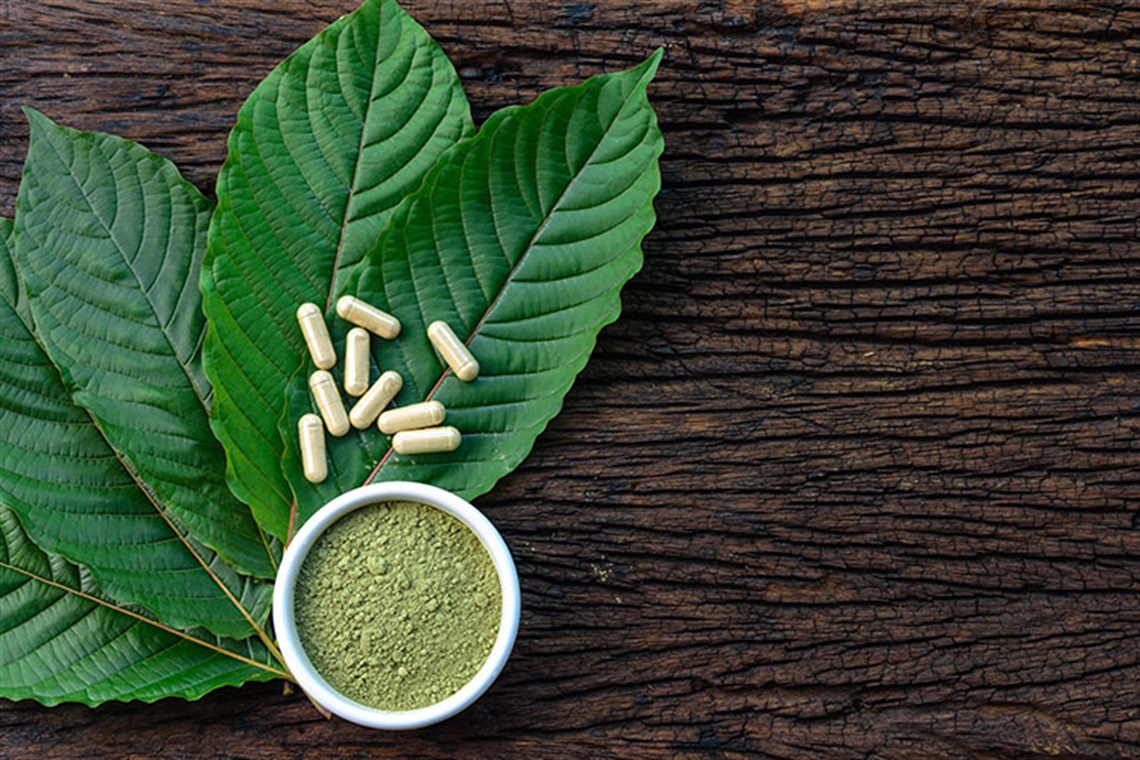 In early December 2018 I received an e-newsletter from Advance Healthcare Network that contained a short article alerting me to the Food and Drug Administration’s (FDA) findings on kratom, a botanical used by some folks for the treatment of pain and anxiety. I had never heard of kratom, and being the curious sort, I decided to dig into the plant, figuratively not literally, to see what the fuss was about.

Kratom is the common name for Mitragyna speciosa, an evergreen tree found in Southeast Asia. In traditional cultures, the leaves of this tree have been used for medicinal purposes for centuries. Substances in kratom leaves have psychoactive (brain-altering) components. Depending on the quantity of kratom consumed the user can experience a stimulant effect with smaller quantities, or an analgesic or even an opioid-like depressant effect at higher quantities.

On September 11, 2018 the FDA warned that certain substances found in kratom are opioids and may have a potential for abuse. Opioids bind with opioid receptors in the body. When opioids attach to receptors in the brain, the results include decreased pain perception and increased feelings of pleasure. Just like opioid compounds, kratom can be addictive. The Internet news-sharing and discussion site, Reddit, had some posters discussing their unpleasant withdrawal symptoms from kratom. One poster wrote that it was “pure hell on earth” as he described restlessness to the point of akathesia when tapering off kratom. (Akathesia is a feeling of intense restlessness, muscle quivering, and the inability to sit still; it is sometimes a side effect of antipsychotic or antidepressant medication).

In 2016 the Drug Enforcement Agency (DEA) tried to temporarily list kratom as a schedule I controlled substance – putting it in the same category as heroin and LSD. Opponents of this idea successfully argued that such a schedule would prevent access to kratom for medical or scientific research.

Kratom contains 40 compound alkaloids. Alkaloids are molecules occurring in nature that are composed of nitrogen and carbon. Many medications come from plant alkaloids. For instance, morphine comes from the poppy plant; quinine (treats malaria) comes from the bark of the cinchona tree; and atropine comes from atropa belladonna (deadly nightshade), and has multiple uses including treatment of heart rhythm problems and to counteract certain poisons.

Because of safety concerns and the potential for adverse side effects, the FDA banned kratom in dietary supplements in 2014. However, kratom products can be found in “head shops” or “smoke shops” and on the Internet. Since kratom cannot be marketed in the U.S. as a dietary or herbal supplement, marketers sell their products with disclaimers such as, “not for human consumption” or “for scientific and experimental purposes only.” Marketers provide vague instructions for using their product. One supplier informed the consumer that the product is “active at 4 to 6 capsules” (active how?), while another told consumers to “ingest only the amount that the capsule holds” (but how many capsules?). One kratom-containing powder marketed on the Internet came with a warning label attached to the back of the bagged product:

Warning: Not intended for use by pregnant or nursing women. If you are taking any medication or have any medical conditions, consult your doctor if any adverse reactions occur. Do not drive, operate machinery or consume alcohol when taking this product. Limit use to two months with a break of one week. Do not use this product if bag seal is missing or opened. Please do your own research before using this product.

Storage: Keep out of reach of children.

This product is NOT intended for human consumption. Not for sale to persons under 18 years of age.

How is it possible that a substance, labeled “not intended for human consumption” is so readily available for consumers to ingest? In some instances governments have stepped in to protect consumers. Kratom is controlled or banned in Australia, Denmark, Germany, Malaysia and Thailand. As of January 2018 seven U.S. states and the District of Columbia have banned kratom (Illinois, Alabama, Vermont, Tennessee, Wisconsin, Indiana, and Arkansas).

On 09/04/18 the FDA sent warning letters to two vendors for marketing kratom-containing products with scientifically unsubstantiated claims. Both companies illegally claimed that their products could be used to treat opioid addiction and withdrawal symptoms as well as other serious medical conditions such as, high blood pressure, diabetes, diverticulitis and depression.

On 11/27/18 an FDA statement warned that nickel and lead were found in tested kratom products at levels that were not safe for human consumption. The Statement concluded that while a single dose would likely not cause an immediate acute problem, there was concern that the chronic use of some of these products could cause heavy metal poisoning. The companies marketing these products were made aware of the FDA findings.

Although rare, acute liver injury has been reported in chronic kratom users. The onset of liver injury usually occurs within 2 to 8 weeks of starting regular use of the substance. The National Institutes of Health (NIH) notes that while the probable cause of liver injury is likely kratom-induced, research could not prove the causal relationship because kratom is often used with other substances of abuse. Patients who present with kratom induced liver injury usually recover quickly once the product is discontinued.

Kratom has been found to have some serious side effects including, high blood pressure (hypertension), confusion, agitation and difficulty breathing (dyspnea). Overdoses of kratom can cause seizures, coma and death. Again, it is difficult to know if kratom alone caused these adverse reactions because kratom is often mixed with other substances. The FDA has identified at least 44 kratom-associated deaths. Most of these deaths were linked with adulterated products, or the victim consumed kratom with other substances such as, illicit drugs, opioids, alcohol, prescription drugs or various over-the-counter drugs.

Medicine and science are evidence-based practices. Further research is needed on the therapeutic uses as well as toxic effects of kratom. Based on scientific evidence, the FDA should provide guidance or regulation to ensure the safety of the consumer.